VE-R scenario for the Netherlands in 2300 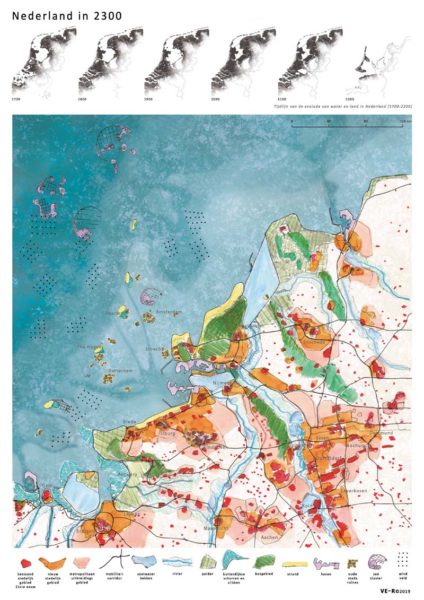 VE-R Scenario for the Netherlands in 2300

VE-R responded to the Blauwe Kamer Magazine call for the development of scenarios for the Netherlands in 2300, considering rapid climate change and facing the challenge of a 15m. sea level rise. The aim of the different scenarios is to provide insight into what the future might hold in store and create a base for further discussion on how we can effectively respond to these challenges.

15m sea level rise might recall images of an “Armageddon”, but VE-R considers the changes in climate and the effects as a process in time.  Looking at the evolution of the Netherlands as far back as the All Saints flood of 12th century and studying the successive steps of 50 years since 1700, gave insight in the constant dynamics of the relationship land-water due to natural disasters (e.g. floods), geo-political transformations and technical evolution. These dynamics and the human anticipation formed the Netherlands as we know it today.

This retrospective approach then unfolds in a scenario for potential steps towards the future. In each period of 50 years logic transformations are envisioned based on sea level rise prediction, technological state and political consequence. A shift from the current conservative protection mode into a pro-active one following the natural forces can be caused by a future disaster. The change of approach to manage liveability in the Dutch delta after a serious surge might lead to a pro-active planning process for a period of 200 years to shift the heart of activities to the higher east side of the Netherlands. As a whole it will be a gigantic operation but over time it can be a consistent and manageable step by step approach.